Come out and see your favorite scream queen turned wrestler at ShockaCon Sept 8-10, 2017 in Charlseton, WV 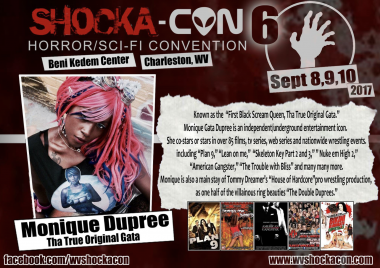 Monique Gata Dupree is an independent/underground entertainment Icon, primed for the mainstream. She cameos, introduces, co-stars or stars in over 85 films, television shows, web series and nationwide wrestling events to date. Including but not limited to: Plan 9, Lean on me, Skeleton Key 2,3 and Skeleton Key 3 part 2, Nuke ‘em high 2, American Gangster, One Night, The trouble with Bliss, Bachelor party in the bungalow of the damned and Juliette Landau’s A place among the undead.

Her first directorial efforts (Shadow Hunters: Devil Speak) was met with a standing ovation at the 2015 Newark Comic Con. Blending Sci-Fi,Horror and slick Noir pulp fiction set it apart from the average offerings of festivals and conventions to much acclaim.

Also, known as the ‘First black scream queen’, ‘Tha True Original Gata’ or simply ‘Gata’ she is media daring to Troma films and Fangoria enterprise alike. Whom both followed, supported and further her career just short of the very start of it. Monique is also a main stay of Tommy Dreamer’s ‘House of Hardcore’ pro-wrestling production as one half of the villainous in ring beauties ‘the Double Duprees’: valet personalities, Monique created and continues to develop with her daughter and ring partner Monet Dupree under the tutelage of ECW and WWE legends.

Monique also leans her vocal talents to the Hip-Hop/Rock fusion BandNegro Childe as lead singer. Other performers and attendances have compared her voice and delivery to the likes of Stevie Nicks, Tina Turner and Janis Joplin.She appears as a model in magazines and comic books/graphic novels both foreign and domestic (and her very own pulp fiction publication: The misadventures of Tha Original Gata: A Cat o’Nine tales). As well as graced the walls of Art Shows and Galleries along the east coast asthe subject of artistic photographs.

Creatively fueled by the example and admiration for her older brother Tony Todd, which she performed with at the age of thirteen. (Lean on Me) Monique has tackled every event and performance with talent, charm, professionalism and an unmatched vigor that has gained her a diehard fan base in ever vestige of her seemingly limitless artistic branches.

A dedicated mother of ten, wife of writer/photographer Anthony S. Thomas, Workout/fitness enthusiast/trainer and vocal community advocate, Monique has lent her time, voice and vast varying abilities to many important social and health causes: homelessness awareness, cancer awareness, women’s rights, domestic and sexual abuse and most recently Child Trafficking via the organizations such as ‘Scares That Cares’ ‘R A I N N’ and ‘Freedom Ladder NYC’.